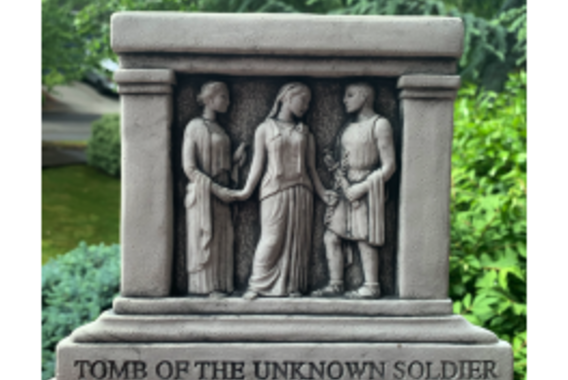 The quote at the end of the marker is from the Declaration of Independence and is tied to America’s sacred duty to never ever forget. The very name of the Garden says : Never Forget —I am in it with you. The declaration is the document that speaks to why we fight and why citizens, from the very beginning of our Country, come forward to defend what defines us as Americans.

A century after white roses were placed on the casket of first Unknown Soldier in 1921, a French family rose grower has created a “Never Forget” variety to mark the upcoming centennial of Arlington National Cemetery’s Tomb of the Unknown Soldier.

The Ducher Rose Growers, founded in 1845, provided the white roses used by a U.S. Army sergeant to choose which of the four caskets of unidentified soldiers’ remains would represent those who lost their lives in World War I. After the October 1921 ceremony, the casket was escorted from ravaged eastern France to Washington D.C., where it lay in state in the Capitol Rotunda. Some 90,000 visitors paid their respects there, and then it was placed in the new marble Tomb of the Unknown Soldier at Arlington.

Last November 11, 2021 marked the tomb’s centennial. Part of the commemoration includes “Never Forget” gardens “drawing upon the ancient language of flowers to help us express our profound love, respect and pride in those millions that have served and sacrificed to preserve the promise of America,” said Richard Azzaro, project director for the Society of the Honor Guard at the Tomb. Thus the name of the rose.

Select the the title text above and view the entire presentation, the file will open in a new window so you can return back here.